CMOS annealing machine is a non-Neumann architecture computer that Hitachi has developed by utilizing the structure of SRAM, a storage device, to perform optimization processing with the Ising model. Since the first prototype was released in 2015, the prototype implemented with ASIC has achieved the world's highest specs, and we also launched a shift generation solution with CMOS annealing in 2020.

CMOS annealing machines that run in this cloud service:

Can process 256k spins (equivalent to 512x512 King's graph) using GPGPU.
Intended for verifying the further increase in the scale of dedicated CMOS annealing machine hardware such as the ASIC version.

Processing combinatorial optimization problems with the annealing method is not especially new; it has been done for a long time to varying results.

Normally, combinatorial optimization processing is performed by executing a program that performs annealing on a von Neumann computer. But in order to gain the high speed and low power consumption of annealing, dedicated hardware needed to be conceived and developed.

The CMOS annealing machine is unique in that it is strictly a non-von Neumann computer. It's unique feature is that it is able to transfer directly data from SRAM directly to calculations. It was developed by Masanao Yamaoka of Hitachi, Ltd. in 2015 and was announced at ISSCC 2015 which is called the Olympics of semiconductor integrated circuit. (Masanao Yamaoka, et al. "20k-spin Ising chip for combinational optimization problem with CMOS annealing," IEEE International Solid-State Circuits Conference (ISSCC 2015), February 2015.)

In addition to CMOS annealing machines, dedicated hardware for combinatorial optimization problems are being rapidly developed and manufactured, some examples include: the quantum annealing machine by D-Wave Systems in Canada, coherent Ising machine of ImPACT, digital annealer of Fujitsu Laboratories and more. As detailed here, new technologies to process combinatorial optimization problems at a high speed are indispensable for improving IoT society in the future, and we need to move quickly.

Among the various combinatorial optimization dedicated hardware, the most appealing feature of the CMOS annealing machine is the low power consumption, excellence in scalability, and the possiblility of downsizing equipment.

Because CMOS annealing machines are based on widely used semiconductor technology, they are made with small chips and there are no special restrictions on their operating environment. It can also be embedded in our daily living space. This has important implications in information processing in the IoT era.

In addition, all of the hardware listed above have the ability to express combinatorial optimization problems to be solved in the Ising model. The larger the number of spins that make up the Ising model, the larger the scale of problems that can be handled, meaning hardware that can support more spin numbers will always be required.

CMOS integrated circuit technology has the highest degree of integration among the technologies used and we use CMOS annealing for its high integration. In addition, CMOS annealing also provides a mechanism for connecting multiple chips, even if a problem is too large scale to be handled directly with the number of spins mounted on a single chip, by connecting multiple chips, the problem can be solved with the power of high scalability.

In order to realize CMOS annealing, it is necessary to have two actions "a means of moving toward lower energy" and "a means to escape from the local solution" as shown in the figure below.

"Means of moving in a direction of low energy" is a deterministic motion that transitions the state to a state of low energy according to the energy landscape. With only deterministic behavior, it is trapped in the locally existing energy valleys called local solutions, making it difficult to explore further lower energy states. Therefore, in order to escape from this local solution, the state of energy is randomly changed by probabilistic motion, and search the state of energy as low as possible.

We call an operation "CMOS annealing" that searches for a low energy state by combining these two operations on the memory cell array simulating the structure of the Ising model.

Realization of base search state 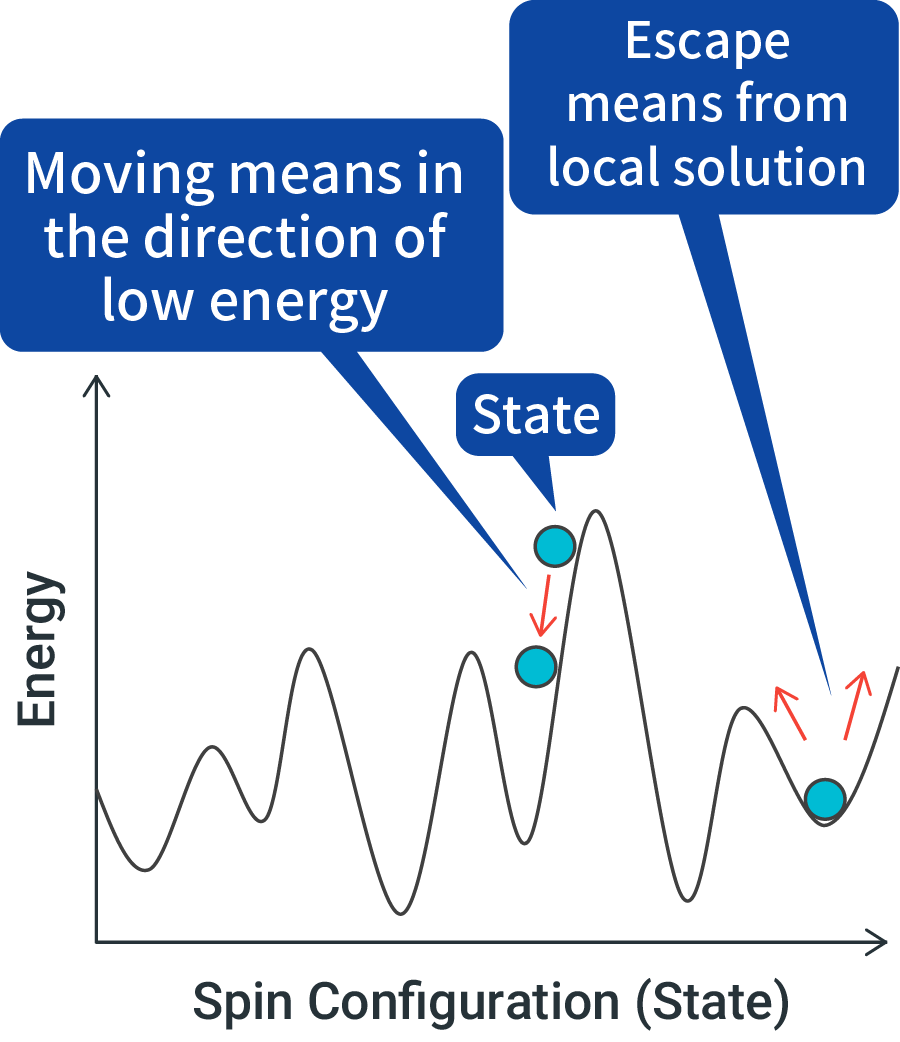 For a method of mapping combinatorial optimization problem to Ising model, please read tutorials on this website and Fixstars' quantum computer information website .