How to use the Ising editor

In the Ising Editor, you can execute an annealing process by directly entering the Ising model.

The lattice-like figure on the right side of the screen shows the graph structure of the Ising model which can be expressed by CMOS annealing machine. This is a graph structure called King's Graph, except for the spin at the end, each spin can interact with a total of 8 directions spinning up and down, left and right, and diagonal.

In the tutorial "what is Ising model?", the following Hamiltonian of Ising model is listed, but $E$ in the part written as $(i,j)∈E$ in this expression becomes a set of edges which make up King's graph. 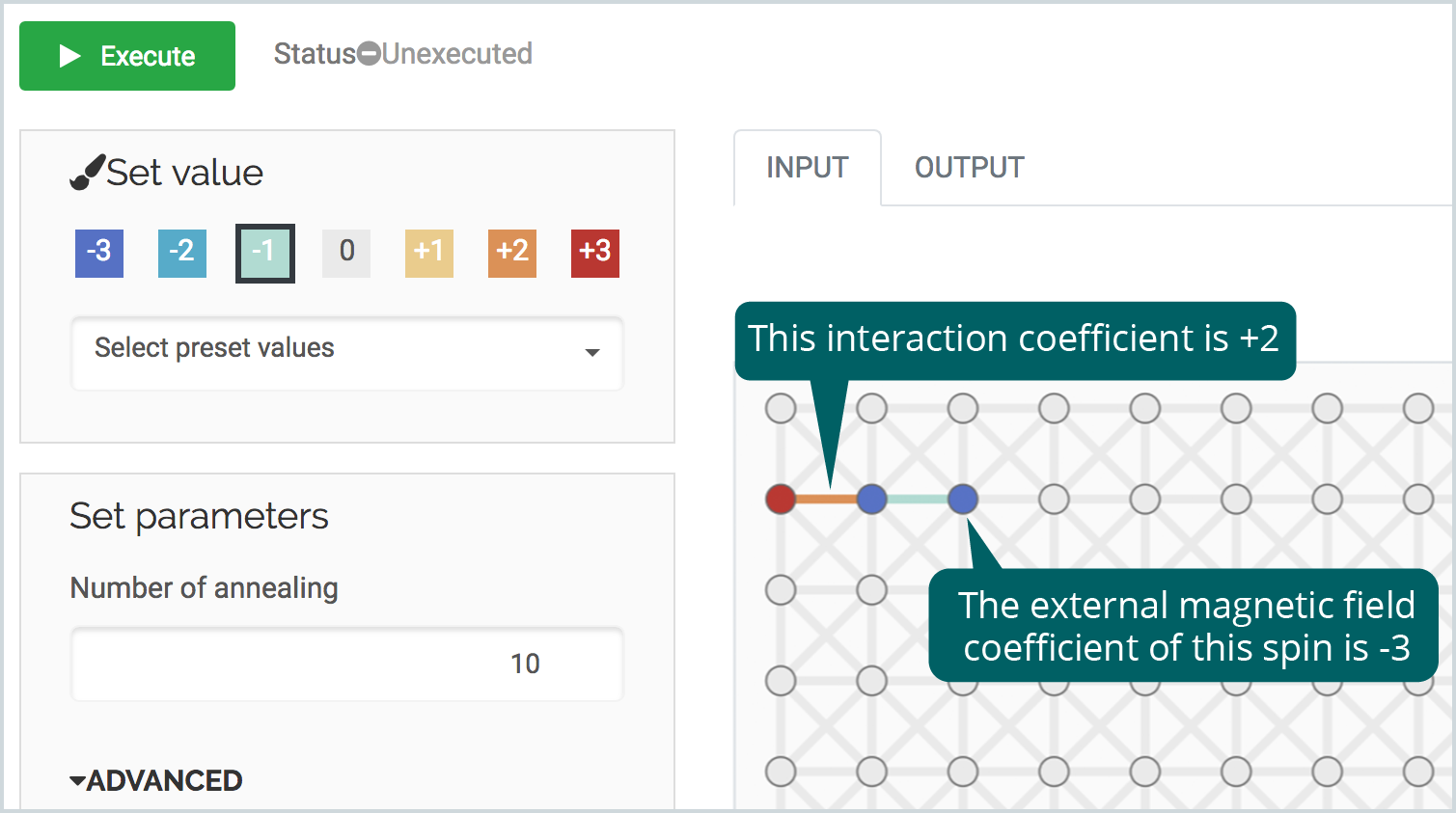 By clicking "Advanced" in "Set parameters", you can set parameters called Annealing scheduler. This is described in detail below.

The CMOS annealing machine is a computer specialized in computation of so-called ground state search of the Ising model.
Therefore, when using an annealing machine, it is necessary to input parameters such as an interaction coefficient and an external magnetic field coefficient for describing the Ising model for which a ground state search is to be performed.
However, when actually calculating, you need to input parameters for controlling the time required for calculation and the accuracy of the solution at the same time. This tutorial will explain these parameters.

Various algorithms can be used to perform the ground state search of the Ising model, but in CMOS annealing machines, calculations are done based on the idea of ​​annealing (especially simulated annealing) as indicated by name.
In annealing, calculations are started from the initial state where the initial value of spin is appropriately determined, and repeat the operation of updating the spin value at each step.
Since the ground state is the spin state where the energy of the whole Ising model is the lowest, when updating the spin, calculate the next spin value so that the energy becomes low from the spin value to be updated and the spin around it.
However, since with this operation alone, energy is directed only downwards in the Ising model as a whole, the energy is trapped in the valley of the locally existing energy called local solution, making it difficult to explore the state where the energy is lower than that. Therefore, we will allow the energy to rise with a certain probability when updating the spin value in order to escape the local solution and search for a combination of spin values with lower energy.
However, if the probability of allowing energy to rise is too high, the total energy will never decrease, and conversely if the probability of allowing energy to rise is too low, it will be impossible to escape the local solution.
For this reason, it is important to properly determine this probability during annealing, which is a parameter when using the CMOS annealing machine mentioned at the beginning.

In order to determine the cooling schedule based on geometric cooling, the CMOS annealing machine of this site uses the following four parameters.

The cooling coefficient described before is calculated based on four parameter values.

In general, it is easier to obtain a better solution by increasing the number of steps and making the annealing time longer, but this will also increase the required time.
Also, because the appropriate annealing schedule differs depending on the target Ising model coefficient value, it is also effective to trial and error to some extent.