This tutorial explains the processing of the annealing machine in the demonstration application image noise reduction".

This is a problem of estimating the original image from a black and white image with noises.

Generally, assuming that the following conditions hold, expect it to work properly on an annealing machine. 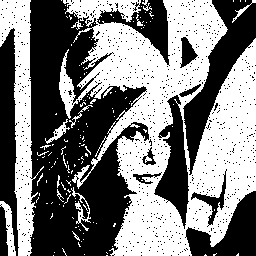 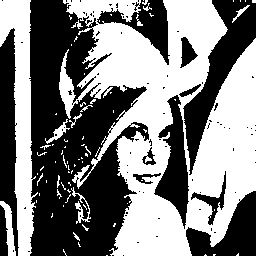 In this problem, since the color of the pixel is binary black or white, we correspond it to the spin value -1 or +1 of CMOS annealing machine.
From (a) above, here we set the value of the i-th pixel of the input image as $y_i$ and the value of the ith pixel of the noise-reduced image as $s_i$.
To make the pixel values of the input image and output image roughly the same, we use the following cost function.

Additonally considering the condition that "(b) In output images after noise reduction, adjacent pixel values are often the same.", the cost function is as follows.

Here $E$ represents a collection of adjacent pixel pairs. When these are added together, the following final cost function is obtained.

We introduced the parameter $\eta (>0)$ before the second term. This is to adjust the strength of the two conditions.
If $\eta=0$, the cost function is in the form of only the first term. In this case, the cost is the smallest when all the pixel values of the output image are the same. Conversely, if $\eta$ is made very large, it is practically the form of only the second term, so the cost is minimal if the input image and the output image are exactly the same.
In the demo of this site, it is $\eta=2$ or $3$.