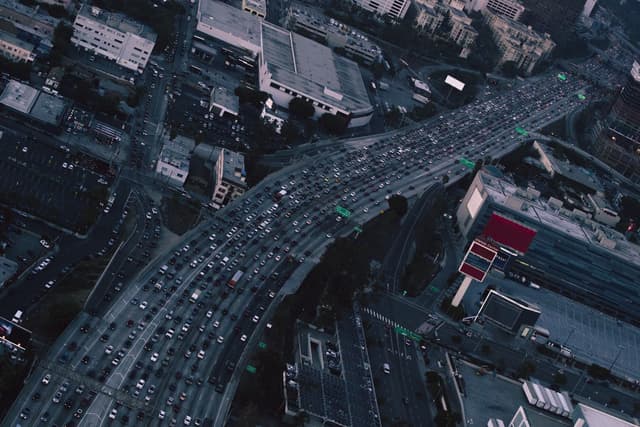 In the easy-to-learn optimization flow, we have taken an easy-to-explain problem and explained the process of performing combinatorial optimization processing with an annealing machine by defining requirements, formulation, input data preparation, and executing. Let's take your learning one step further by experiencing the development flow of a combinatorial optimization system using a CMOS annealing machine through a series of steps from problem requirements definition to executing.

The contents of this page are based on the paper by Toyota Central R&D Labs., Inc. and the University of Tokyo [1] and the blog post by Jij Inc. [2], which is based on the paper, and are reorganized so that you can practice what you have learned in "Easy-to-learn optimization flow" as an exercise for CMOS annealing machines. The knowledge explained in "Easy-to-learn optimization flow" is added to the explanation of defining requirements, constraint setting, formulation, etc. defined in the above paper and blog, which are the preliminary steps to perform in CMOS annealing, aiming to provide both review and application.

What optimization problem can be formulated to solve the practical problem of reducing traffic congestion? The objective of the optimization problem discussed here is to reduce traffic congestion by making cars flow as smoothly as possible. In other words, what we want to achieve is to equalize the number of cars waiting vertically and horizontally at each intersection through signal control. For this problem, let's define the requirements, i.e., the language to communicate to the computer what we want to do.

Definition of Roads and Signals 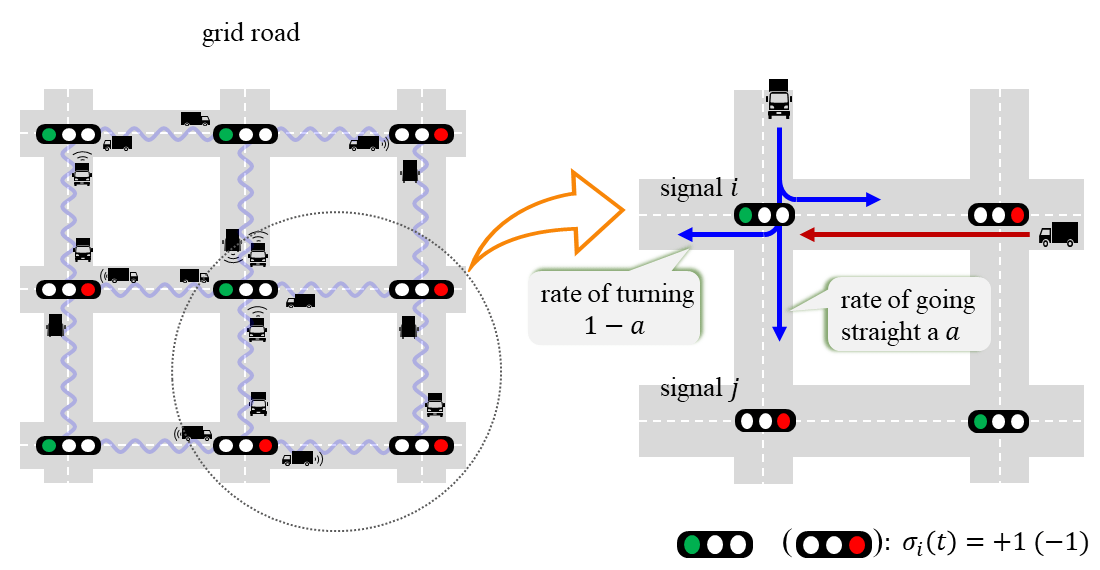 However, it cannot be left to luck to determine whether operating a single intersection will move the entire area in the direction of eliminating traffic congestion. If a horizontal traffic signal is left green and left unattended, vertical traffic will naturally become congested. Next, we must define the "relationship between intersection $i$ and $j$" and the "relationship between time ($t$) and time ($t+1$)," taking into account time variation.

Next, let us formulate the signal control as an Ising model. At this point, we will try to incorporate changes in the time direction by including the "time variation considerations" described in the previous section.

First we assign the Ising variables $+1$ and $-1$ to the signal control, which is the smallest element for "improving the state" of each and every intersection.

The direction (vertical or horizontal) of the signal to be green could be set as an Ising variable.

Next, for the ultimate goal of optimization, which is to eliminate traffic congestion, we consider modeling with consideration given to the flow of time and the state of each case.

Model the amount of cars

Next, let's look at how the variable $x_i$ is defined.

Now we have an equation that expresses the relationship between the color of the traffic light at an intersection and the amount of cars.

We have been able to model the relationship between the amount of cars and the color of the signal. Now we can proceed to optimize it with a CMOS annealing machine. For the relational equation we have established, we can evaluate it as follows, taking into account what kind of operation "makes it better" to achieve our objective.

The optimization is to equalize the number of vehicles waiting horizontally and vertically at a given intersection.
In other words, it can be said to be a problem of determining the signal assignment $\boldsymbol{\sigma}(t)$ such that $\boldsymbol{x}(t+1)$ is close to $0$. By squaring this, $0$ is the minimum value. Therefore, the objective function can be set as follows

Reference [3]: On the product of transposed vectors

Use of "matrices" to facilitate representation of repetitive calculations

This section explains that the relational expression in (3) can be rewritten in matrix form as (4). A matrix is "a collection of numbers and formulas with similar properties that can be written together in the form of a matrix to simplify computation."[4]

Reference[4] What is Matrix, Meaning/Purpose of Matrix

Although Equation (3) allows us to establish a relationship between the intersection and its four neighboring intersections (signal color and vehicle volume) at time $t+1$ at intersection $i$ and the previous time $t$, it does not express the objective of making the vehicle volume uniform at all intersections in the entire area. Furthermore, the energy function is not in the form that would result in the least amount of energy for the optimal solution. To solve all these problems at once, and to create an equation that calculates the state of all intersections, and to represent it simply, we will use "matrices" here.

For the sake of understanding, let us define 9 intersections arranged in a grid with 3 horizontal rows and 3 vertical columns, and represent them in matrix representation.

The variables $x_i(t)$ and $x_i(t+1)$ in equation (3) represent the state of a single intersection, while $x(t)$ and $x(t+1)$ in the matrix notation of equation (4) are in vector notation and represent all intersections simultaneously, so the meaning is different. In addition to the fact that the $i$'s can be taken, the typefaces are often expressed differently in terms of appearance.

A *vector is a matrix whose components are in a single column or row.

(4") is further rewritten as a matrix representation of the components, with each term corresponding to (4'). The last term on the right-hand side is the component of $j$ that adds up to $\Sigma$. $A$ represents the component matrix that specifies the intersection in the four directions relative to intersection $i$. In this case, we have the following nine intersections in matrix form: for intersection 1, it is the adjacent numbers 2 and 4 that are designated as $j$. In (4"), the $i=1$ relation computes the elements of the first row.

Now that we know what is involved in processing the matrix representation, we will process it to form it as a cost function at the next section.

Speaking of constraints, the increase in the number of vehicles at an intersection may cause congestion at adjacent intersections, but these constraints have already been taken into account in the modeling up to this point, so there is no need to consider new ones.

There is something else to consider in this problem. In this problem, signals change to reduce vehicle congestion, but if they change too frequently, they can impede the flow of vehicles. Therefore, it is necessary to set a penalty (weighting) for cases where the signal changes at adjacent times. This is the optimal solution.

With the derived cost and penalty functions, the energy function of the Ising model for obtaining the optimal solution is as follows

Writing all this down in terms of $\boldsymbol{\sigma}(t)$, we get

The annealing machine is now ready to be shaped in such a way that it can derive the optimal solution.

Now that we have defined the requirements and formulated the formulation (modeling, setting the objective function, and organizing the constraints).

From this point on, let's narrow down the range of roads and consider $3 \times 3 = 9$ intersections, and actually create and run the data to be input to the CMOS annealing machine.

How was it? Here is a video of an even larger road with optimized signal control. This demonstration shows the results of a simulation in which traffic congestion is eliminated by optimizing 64 x 64 = 4096 intersections using a large-scale CMOS annealing system to be exhibited in the Cooperative Research Building at Hitachi, Ltd.

Play and Learn with Annealing Machines