In this article, we will create input data for the number partitioning problem that we have made "formulation" in the previous article. Creating input data is a routine task, but this article will cover its important fundamental topics.

In the formulation, we considered the Ising model and defined a cost function $H$. 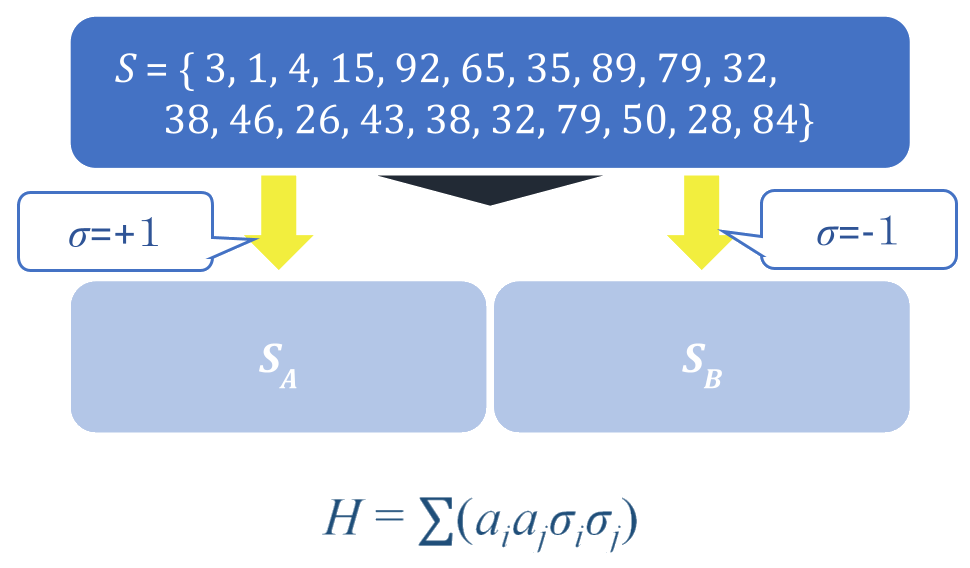 In this case, to compute the cost function $H$ for some combination $\sigma_1, \sigma_2, ..., \sigma_N$, we need to know the values of $a_i a_j$. The set of values calculated for every possible combination between $i$ and $j$ is the input data to an annealing machine, which is also called $J_{ij}$.

If the left figure below represents the entire Ising model, one $J_{ij}=a_i a_j$ can be thought of as representing the strength of the influence between the Ising variables $\sigma_i$ and $\sigma_j$, as shown in the enlarged figure on the right. This force between spins is called the interaction.

Relationship between the cost function and the Ising model

Let us calculate the interaction $J_{ij}$ in the number partitioning problem.

All interactions to be given are obtained by multiplying elements 1 through 19 evenly, as shown below.

STEP 3: The amount of data grows faster than that of the elements.

In the formulation of the number partitioning problem, all the elements are connected to each other (fully coupled), so the interaction is required for elements $x$ elements. As shown in the figure above, even for 19 elements, 152 interaction coefficients for the Ising model are required. If the number of elements were 100, the number of interaction would be $100(100-1)/2 = 4950$.

If the formulation can be made simple in terms of the relationship between elements, i.e., no multiplications appear, then the number of interactions can be reduced and the input data can be reduced. Incidentally, when any elements can interact with each other, it is considered "fully coupled".